I was thinking that once you are here in Fair Play and are enjoying some of the great wines from the many great wineries here, you'd wonder how it all started. Well, I'll give you some history, at least as I know it. I think I'm pretty sure of most of the details since Cindy and I have been traveling up to the Fair Play area for over four decades and long before there was any wineries. We ran the car rallies of the late sixties and early seventies. (For those who don't remember or know about car rallies, let me explain. A car rally is either a gimmick rally or T&D - time & distance. You follow directions along country roads & byways to check points and eventually get to the finish. Either you do it to be timed and get the closest mileage that the rally master designed or you read the pages of instructions and follow the fun twists and turns in the instructions; to get to the finish line. It was usually a pizza parlor or a bar.) Up here in this part of El Dorado County the roads twist and turn and all the roads connect into another one that connects into one that connects back to the road you started from. So you really can't get TOO lost for TOO long, as long as you keep moving. 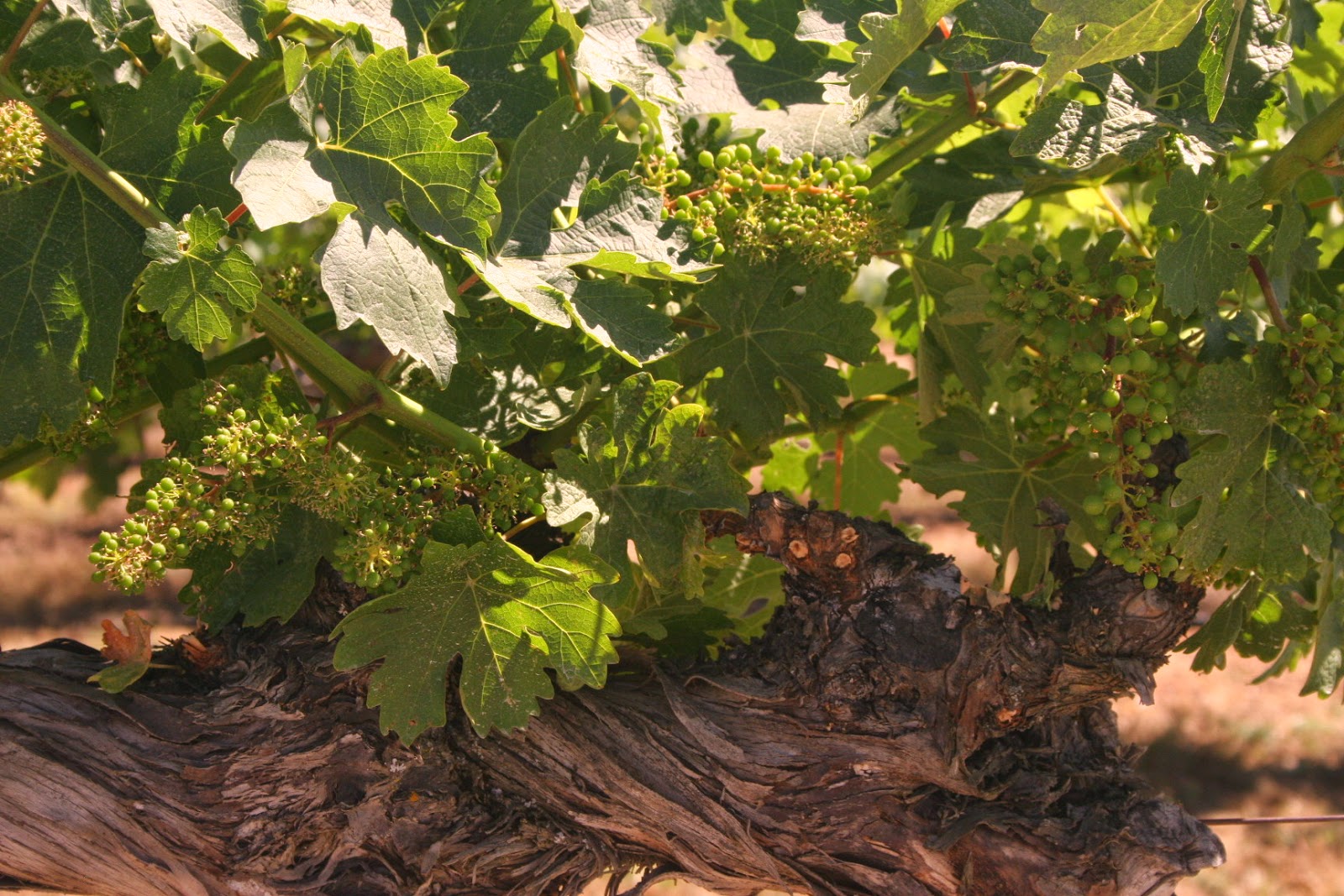 A vine I've named Bountiful with its new grapes.

Now that you understand how we know what was in Fair Play before any wineries, I can now tell you about the vineyards and wineries. I believe it was about 1967 the UC Davis Agricultural Extension Program was studying some of the places and elevations where grapes would flourish. Vernon Gerwer owned property in Fair Play. He was a County Supervisor for many years and UC Davis contacted him about their study. They worked together to plant a few acres of grapes. A few years later there were rich, sugar concentrated grapes that matured. The next question was, were those grapes viable for making wine. The viticulture & enology department at the campus made some very good wine. Ala, wine is possible in Fair Play.

Vernon Gerwer started Gerwer Winery, Les Russel started Granite Springs Winery and Brian Fitzpatrick started Fitzpatrick Winery & Lodge; they were the first three wineries in Fair Play. Of course it took a few years for the grapes to mature before making wine. They all opened for business about the same time in the early 1980's. That inspired other people to forge their own vineyards and start wineries. L.W. Richards quickly followed suit with his LW Richards Winery. He sold to the Bailey family shortly after his successful venture started. The Bailey's changed the name to Windwalker Vineyards & Winery in honor of one of their horses. In the mid '90s Arnie & Paige Gilpin bought Windwalker for their winemaker son, Rich. Now Windwalker is owned by Jim & Alanna Taff. Windwalker was awarded the Golden Bear for the BEST RED OF SHOW at the California State Fair in 2011 for their 2008 Primitivo. That was the first for any Fair Play wineries. 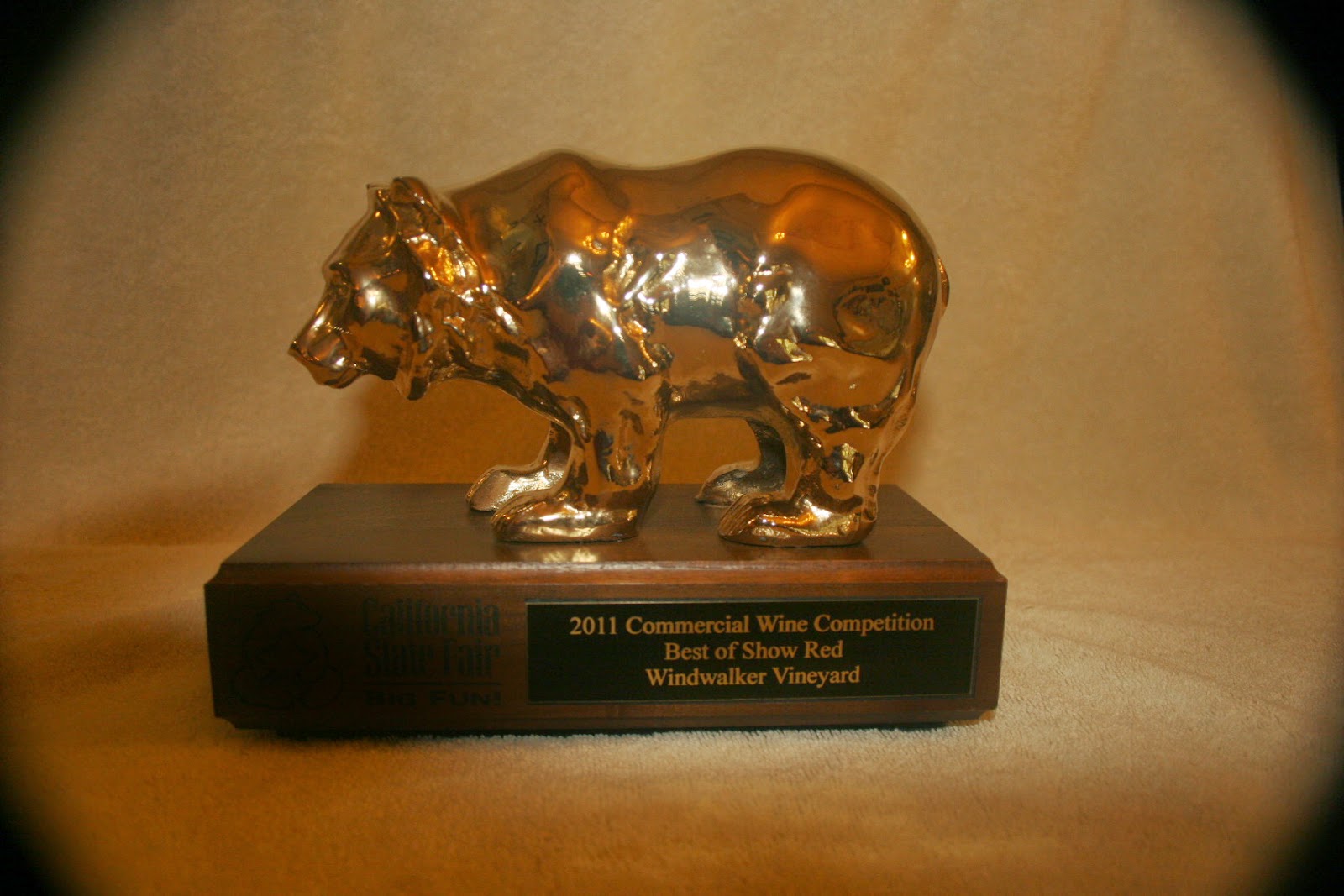 Owners of the earliest wineries also sold. Gerwer sold to Charles B. Mitchell who changed the name to Charles B. Mitchell Vineyards. Les Russel sold to Frank Latchman, owner/founder of Latcham Winery, who kept the name Granite Springs. Since Frank passed a few years ago the Latcham family has sold Granite Springs to Chris Barnham. After 30+ years Brian & Diana Fitzpatrick sold Fitzpatrick Winery and Lodge to Vivan Li. She has changed the name to Gold Mountain Winery and Fitzpatrick Lodge. 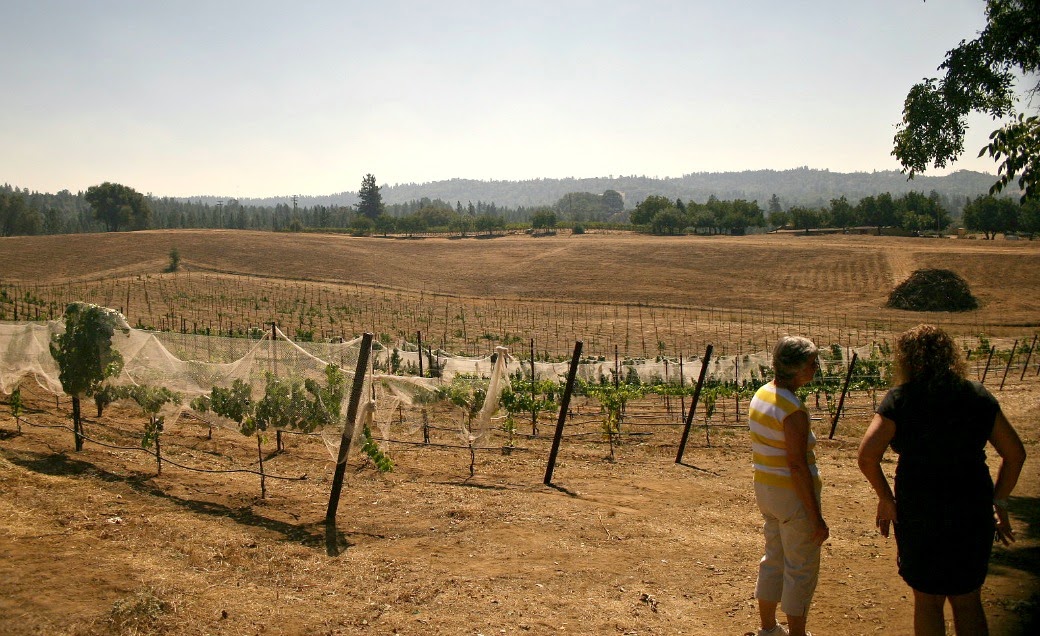 Here are Cindy and Sue Langman in the newest vineyard
in September '13. The Langman Family Winery.

Oh, yeah. I almost forgot to tell you. Over the years during this evolution of Fair Play Cindy & I have been to every one of these wineries and all the newer ones I'll write about next time.

Daryl
Posted by Daryls Ponderings at 9:57 AM