I was thinking that since we started Lucinda's Country Inn in September 2004, we have had the pleasure of having several cyclists stay at the Inn. All those staying with us have been going west to east. These latest guys are following the Western Express Trail that meets with the TransAmerica Trail in Pueblo, Colorado. The Adventure Cycling Association (ACA) maps show them the way. (We are now listed in the ACA maps as an excellent place to stop overnight or make a day stop to rest before the hard journey over Carson Pass at 8,500 feet about 35 miles up the hill.) Starting in San Francisco May 25th this latest trio will finish in Yorktown, Virgina, a distance of approximately 3,800 miles ending sometime in late August. This trio, Frank Garber, Robert Birgance, and Gus DeSilva, met each for the purpose of making this trip. Frank and Gus met a couple times over the past year to discuss some details of the trip and had video conferences with Robert. All three met face to face the first time in SF for the "Dip of the Wheel", a ritual cyclists do to start their coast to coast journey. They gather at the Pacific Ocean so they can officially start their adventure. 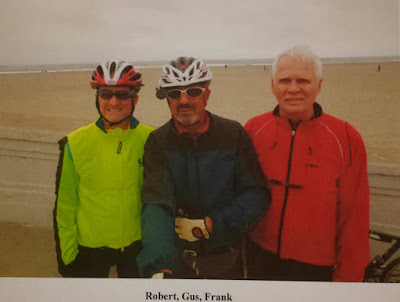 This is from Frank's blog. I forgot, like an idiot, to take a pic before they rode up the hill.

If you want to follow their trip, via each one's blog, you just have to click here .

A brief bio of each is appropriate as all are retired and they are the oldest cyclists we have had stay with us. I admire their drive and enthusiasm for their journey. Robert has been officiating high school lacrosse and had the privilege to travel to Montreal, Quebec, Canada and Basel, Switzerland to do just that. He has been training for his coast to coast effort for over a year. Gus now lives in Concord, North Carolina, being a transplant from NYC. There he rode in the Five Burroughs Ride in 2012. That is a trip through all of NYC along with 35,000 other riders and thousand of residents cheering them on. Frank was a runner most of his adult life until 2007 when knee surgery sidelined him. He started biking and now is an avid rider in many trips with groups along the east coast. He lives in Potomac Falls, Va, close to DC. The three met through the ACA communication network and partnered to make this trip.

Not long ago we had a solo rider doing the west to east trip, he was from Norway. A father son team ventured this way on their way to Pennsylvania, raising money for the preacher father's church school. They were on the trip to raise $100,000.  Their trip had some bumps; the son became dehydrated going up highway 88 and had the support car take them back to Vallejo for a few days. Then they returned to their last spot and continued all the way. Dad lost about 50 pounds. Good for him, because he and I talked and compared our zippers; our heat by-pass scars. I just need to join him in losing 50.

We had two young whipper snappers ride into Fair Play on their long bike trek across America to make it to Utah then calling their cross country trip a western leg, with the Midwest and eastern legs to come in future years. It's always fun to talk to the riders and find out why they are doing what they are doing. I also yearn to see America up close and personal. I will just use my car.