Where in the World is Fair Play, CA?


I was thinking, if I didn’t live here in Fair Play, CA would I have a clue as to where it was? Probably not.

Fortunately for my wife, Lucinda, & I we were very young when we discovered Fair Play. There were no wineries, no restaurants, and very few things were out here. We used to do the fun car rally circuit in Northern California back in the late sixties when our son was real small and he could entertain himself by playing in the back seat of our 1960 Corvair, after he out grew the folding car bed.  We did get newer and different cars during the rally days, but we continued to let our son play untethered in the back seat. Somehow he managed to survive the ordeal without injuries or too much trauma to his psyche. Soon we added to our family, just after we got a much better car – a 1968 Camaro. It was best suited for two, but our 3 year old son had fun in the back seat, scampering and jumping around. His little sister soon cramped his play room so we had to abandon the Camaro for an Opel station wagon. That’s enough about family history. I’ll get back to the point of where in the world is Fair Play, CA?

Americans don’t need a passport, but they do need a driver’s license. There are no airports. There is no transit system or taxis in Fair Play. You get there over hills, through the woods, down the canyons and up the other sides. In other words Fair Play, CA is in the middle of God’s Country. If you Google Map Fair Play in satellite it shows lots of trees and few roads. Yep, that means you’re looking at the right spot on the map. Since Lucinda & I did our playing in Fair Play in by gone years, there have been many changes. The most obvious are the vineyards and wineries scattered around South El Dorado County. Another way to look at it is from the Amador County side. The Amador Wine Region was an up and coming area many years before Fair Play, yet it is just 10 miles to the Southwest. So physically Fair Play is between Placerville and Plymouth. And still most people have a new question; where in the world are Placerville and Plymouth? 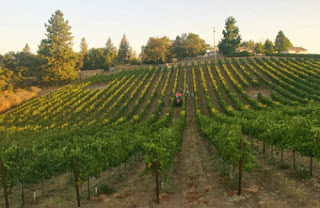 In the heart of Fair Play is the Iverson Winery &
Vineyards at sunrise on the first day of picking their
Merlot in September 2013.

Lucinda & I live in Fair Play because it is paradise, not because it is easy to find or world renowned. Lucinda’s Country Inn and the 30 wineries are helping the world find Fair Play. But the best way to find Fair Play is to look at your map and find Lake Tahoe. Then follow highway 50 toward Sacramento. About 40 miles west down the hill is Pollock Pines at the Sly Park exit off of 50. Take that and stay on Sly Park Rd. for about 15 miles and turn left onto Mt. Aukum Rd., at the corner where Holiday Market and the Pizza Factory are.  You need to go through the 4 way stop about 8 miles after your turn. Once through the stop and 3 miles down the road turn left at Gray’s Mart, our store and gas station, onto Fair Play Rd. You made it to Fair Play. These directions are different than what we all give to people when they are driving around here. We all say go to the stop sign and turn, then at the next sign, about 15 miles or so down the road at the big red barn in the middle of the small vineyard on your left take the last driveway before the yellow house. I give you these directions somewhat is jest, but Fair Play is in the heart of the California Gold Country, rich with Gold Rush history and folklore. The 49ers of the Gold Rush era didn’t make much money by finding gold lying around the creeks and rivers. In fact, even with the Placer method of mining didn’t yield much gold; most of the 49ers went home broke and broken. True, some, a very few struck it rich. It was the mercantile owners, the lumber mills and the shipping companies that made the money. 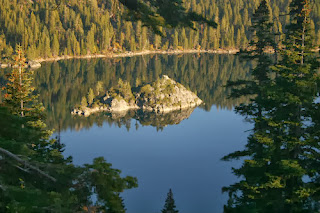 Emerald Bay in Lake Tahoe October 21, 2013 in the
early morning. The water is absolutely still with no boats
on the lake. We've never seen the water so still.

Well, that’s how you find Fair Play. Why would you want to find Fair Play, CA you ask? That’s for another time. Suffice to say those of us who live here are willing to say why and how we got here. We’re a friendly lot and love to share our lives with those who find us. Most of us share a commonality of starting something from scratch and finishing after years of our labor of love with blood, sweat and tears. No matter what our previous life was, be it a biochemical genius, a museum curator, alternative fuel expert or a federal agent (more about in another episode) there are folks from all walks of life that have now settled into their places right here in Fair Play, California – God’s Country.

…’Til Next time
Posted by Daryls Ponderings at 3:16 PM