What a Wonderful Life - Part Two

I've been thinking about this part two even before I wrote part one. This will not be easy, but I'll start with the easier stuff and move on from there. 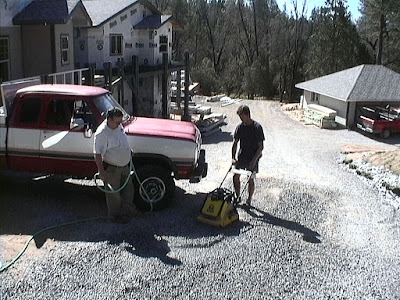 Sean with the compactor and I getting the driveway ready to pour concrete, circa 2004.

If you read any of my prior posts you know I've written extensively about Fair Play and the changes over the years. There have been a few recent changes that need to be noted. Single Leaf Winery has sold and the new winery will open when allowed to open. The Medeiros family is from the San Jose area where they have recently closed their winery and are telling their wine club to come to Fair Play. They have great wine making experience, so I have all the faith in the world they will take Scot Miller's Single Leaf grapes and make some fabulous wines. Perry Creek Winery was in escrow, but that has now been stopped.The winery was closed for a while so ABC could be satisfied. Deter Jurgens has had a battle with cancer, but recently and thankfully it is in remission.  Toogood Winery has been bought by the Middelstaedt Family. Ron and Darin are having their sons, Brad and Tim do the on site daily work, while Tm's fiance, Kayla, will see to it all that daily stuff is actually done right. When daughter Haley finishing college in Texas she will join her brothers. Ron and Darin are going to bounce around on weekends welcoming guests and establishing new friendships. The new owners have promised to have special tastings in the cave and use the out buildings for everyday tasting experiences.

Sonia Baron opened Bom Vinho Winery, the newest winery in the Fair Play Appellation. It is located next to Mellowood on Omo Ranch Rd., Sonia has some Vermentino (one of Lucinda's favorites) among their tasting flight. All in all their wines are good and competitively priced. Another California State Fair Golden Bear has been bestowed upon a Fair Play Winery. Gwinlan Estate has just been honored with the Golden Bear for their Champagne. The new owners of the Mt. Aukum mountain top, now known as Kehret Winery, have made the mountain a fabulous place to visit. The road up the hill has been resurfaced for smooth sailing and they are continuing to expand and improve the grounds so you can enjoy that million dollar view.


The Pub at Fair Play has been closed for some time now, which has now been replaced by the excellent Creekside Cork and Brew. Everyone, locals and visitors alike, has raved about the three most important things for a restaurant: 1) hospitality/service; 2) quality of food; and 3) timing of getting your food. With A+ ratings so far, there is great hope Creekside will be here for many years to come. Gold Vine Grill has sold. The new ownership, Liz, is struggling with the county to get going. The great news is they haven't given up yet and hope to open by May 1st, if the virus lets them 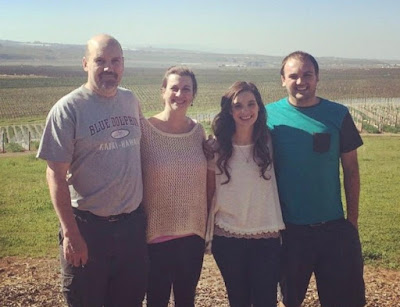 Sunnymarie will be the dominate face you see, but Michael, AJ and Brenda are right beside her and following her guidance so that everything will be a fabulous transition form the old folks to the much younger and energetic folks. (We used to be young young and energetic once too. Used to be is the operative words and that's why we are turning over the reins.)

We have loved making Lucinda's Country Inn, Lucinda's. The great friends and guests we have enjoyed over the years will always be close to our hearts and our memories filled with great joy. We can NOT emphasis enough how much all of you mean to us. Fair Play and Lucinda's has been home for us the longest period in our lives and will always be our top spot for our little getaways.

Daryl
Posted by Daryls Ponderings at 11:13 AM