What a Wonderful Life - Part One

I've been thinking about what to write since the last post in April. That one ended with my heart on my sleeve. This one will be a lot different, I promise. I have written about the history of Fair Play, the old and new wineries of Fair Play and about how to get to places not that far away from Fair Play. Now I'm writing a history for Lucinda's Country Inn. After fifteen years it's time to let you know how we did it.

For now I'm taking you down memory lane of what has been a 25+ year adventure for Cindy and I. When we moved to Orange County, CA in 1991 we knew we were to return to Northern California in a few short years. Cindy promised here employer she'd be there five years. Nine and a half years later we returned to start Lucinda's Country Inn. Right after we landed in South Coast Metro (the area at the seams of Costa Mesa and Santa Ana, around the South Coast Plaza Shopping Mall) we started talking about what will we do when we go home. I asked Cindy to think in terms of no longer being a bureaucrat, which she had been for 25+ years. Maybe she would like to do some type of entrepreneurial activity. After all I had lived most of my life in the private sector and it wasn't bad. Without going into all the excruciating details, she said let's do a B&B. Over the next few years we went to conferences conducted by the B&B industry and learned a lot. We started looking for RAW land in Amador and/or El Dorado Counties. We knew them both well because many years earlier we traveled them extensively, as young newlyweds.  There was nothing up there but oak, pine and walnut trees and of course rattle snakes. A lot has changed.  In 1997 we found the ideal spot and started our work to make it happen. Just like the pioneers, we cleared the land in order to build; well we did have chain saws, backhoes, graders and trucks. Other than that we did exactly what the pioneers did. (I still can't believe what they did to get over the Sierra Nevada Mountains.)  For our labor of love and the wild ass dream of becoming Innkeepers, we sweated, we worked long hours and cleaned up with a solar shower. We went to the few nearby wineries to get gallons of water (we brought empty milk containers from home in SoCal)  for the shower and the few plants we tried to get started. They all died; maybe because they got water about every three weeks.

We finally decided we had to move back north before we submitted our Special Use Permit plans in 2001. Talking with El Dorado County employees for several years, I knew we needed to babysit the process every step of the way. Everyone I talked to had a different story, so what were we to do but fight tooth and nail to get straight talk and solid answers. Our neighbors were no help. They posted a NO HOTEL sign at the edge of our property and spoke at every meeting the county had for our project. Of course they didn't know what they we talking about, but they told the county the B&B would lower property values, cause traffic jams, and besides we planned on having baseball park lights on our property where thousands of people would attend conferences. We have 11 acres with a steep slope and a seasonal creek. That didn't matter, our friendly neighbors insisted we were going to build on wetlands because one of them had plants from a wetland (the creek in winter). I loved it when a planning commissioner asked where he got the plant. To top it all off, the County had no idea about what regulations a B&B had to follow. Like friendly idiots we gave them a copy of Amador County's B&B regulations. Our County Supervisor didn't have a clue about a B&B requirements. They all were operating by the seat of their pants until a planner from Santa Cruz was hired. She knew what to do and she would tell everyone how to do it. At least that is what she thought. She wanted to be a buzz saw with us until I went from the public counter directly to the Director of Planning and informed him what she had told us and how she would set this department straight and tell the Director how to do it.

It took us one week shy of one year to get our Special Use Permit (#01-025. I remembered that; I didn't have to look it up.) So we got our loan approved and started from the trenches going up in building Lucinda's Country Inn. 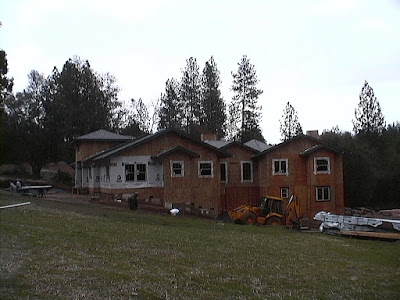 The shell of the building takes shape in January 2004

Today, fifteen years ago, we had our first guests at Lucinda's Country Inn. Labor Day is the day Windwalker Winery called to see if we could accommodate some wine club members. We really weren't ready for guests but when Arnie Gilpin said they lived in Roseville and were not able to drive home we relented. Fortunately we had just completed our first Suite, later to be named the Vineyard Suite. They had to stay in the suite because the great room and dining rooms were filled with supplies and tools. They never noticed, but they enjoyed breakfast in bed the next morning. That was the only time we served breakfast in bed. We made our first money as Innkeepers. I still have a copy of the check he wrote for the stay. So a little nostalgia sets the mood for today. We have started our sixteen year of being Innkeepers at Lucinda's Country Inn.

.....To Be continued with Part Two

Posted by Daryls Ponderings at 1:53 PM